Bored of international friendly matches? Us too. Which is why we are actually quite excited about the UEFA Nations League competition that started in September 2018.

Here we’ll bring you all the information you need about the Nations League, including the format of the competition and the teams involved. We’ll also bring you betting tips to help you find the best value bets.

What is the UEFA Nations League?

The UEFA Nations League is a new competition for the 55 national sides who fall within the administrative umbrella of UEFA. It will largely replace international friendly matches, and though the standard qualification process for Euro 2020 will still take place, this competition will also allow four teams to gain a second chance of qualifying for the Euros if they fail to make it through the standard route.

The first ‘season’ of the Nations League ran from September 2018 to June 2019. The draw for the league phase of the competition took place on 24th January 2018.

How does the Nations League work?

The 55 UEFA national sides have been put into four leagues, with League A (16 teams) being filled by the top-ranked sides and the standard getting lower as we go through Leagues B (16 teams), C (16 teams) and D (7 teams). This has been adjusted since the inaugural season as you can see below: 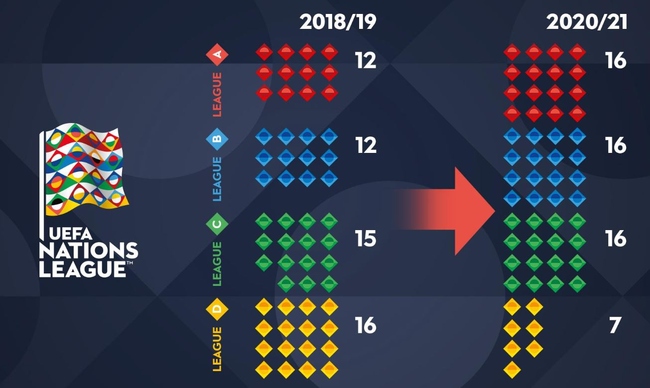 Each of the Leagues has also been split down into groups: Leagues A and B have four groups of three teams, League C has a group of three and three of four, while League D has four groups of four. Each side will play each of the other sides in their group once at home and once away during the league phase.

The winners of the groups in League A will qualify for the finals, the winner of this final will become the Nations League champions.

The winners of the groups in Leagues B, C, and D will be promoted to the league above for the next season of the competition. The bottom sides in Leagues A and B will be relegated to the League below for the next season. However, the bottom four teams in each group from league C will enter a playoff stage to determine which to teams are relegated to League D for the following season.

The best four sides in each league who have not already managed to qualify for the Euros at the end of the league phase will be put into play-offs. Each league will have one place at the Euros available for one of its teams.

Being a new competition, things could still change further as the format settles, but this is how it stands as of 2020.

With a whole host of competitive international football matches on the horizon, football betting fans will be in their element. International friendlies are notoriously difficult to call as you never know when a manager will play a weakened or experimental side, or indeed whether the players simply won’t be up for it. But with something to play for here, we fancy there will be plenty of opportunities to beat the bookies.

We’ll bring you our tips analysis for this market in due course. In the meantime, check out our Football Betting Tips page for the latest tips and previews.