Football accas are a weekly ritual for many people who relish the chance to win big from a small stake, which is one of the main appeals of football accumulators and multiples in general. They can be a cruel cruel mistress though and are notoriously difficult to see through successfully.

When your mates warned you about putting Bradford on your acca and then they’re the only team not to win.#BCAFC pic.twitter.com/GpkKzYG45U

If you’ve never placed an acca or aren’t even sure what one is then you’re in the right place, as we’ll explain everything you need to know.

What Is an Accumulator?

An accumulator, often shortened to ‘acca’, is simply any bet with more than one unrelated selection, whereby all selections need to win for the bet to return anything.

Example of 6 selections for an acca

A bet on Man United to beat Accrington Stanley would be a single bet, with just one selection and one outcome needed to win the bet – a Man Utd victory. For an acca there would be more than one result that would determine the outcome of your bet. The simplest type of acca would be a double: a bet with two selections where both are needed to win. So you might combine Man United to beat their minnow opponents and on the same day for Man City to beat Yeovil, that would be your double or your acca. If both teams win then so does your bet, but even if only one loses then your whole bet loses too.

The number of teams you bet on to win can be much higher than two, but although the odds increase the more selections you make, the chances of the bet coming off get much slimmer. It’s about balance. 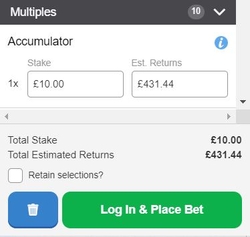 Betslip for selections in image above

Accas are most common in football and horse racing but they can be applied to anything; for example, one very famous accumulator placed in 1989 saw a man bet that U2 would still be together in the year 2000, Eastenders would still be on the BBC, Neighbours would still be on British TV, Home and Away would still be broadcast, and that Cliff Richard would be knighted. That outlandish bet saw the lucky punter turn £30 into almost £200k – not bad eh?!

A more common acca might be picking the winner from three separate horse races on the same day, or a popular one from the Premier League is to back “the big four” to all win their respective games at the weekend.

How Do Accumulators Work?

Let’s run through an imaginary acca: 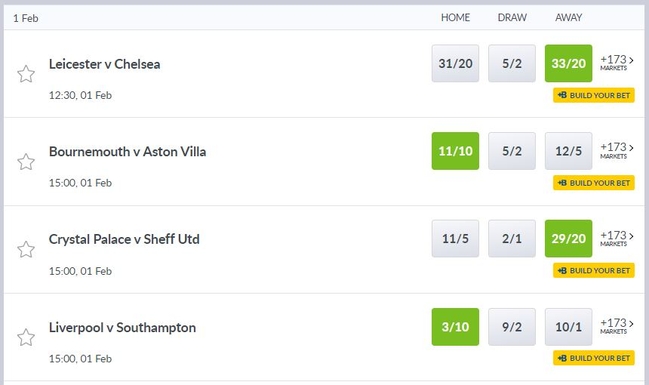 Perhaps you might back Chelsea to win the early Saturday game, then Bournemouth, Sheff Utd, and Liverpool to win their games which kick off at 3pm. For the sake of simplicity, let’s ignore the odds in the image and assume that all sides face relatively evenly matched opponents and all are priced at evens. Your winnings, therefore, (and the way they are calculated) based on a £10 acca would be:

This demonstrates really well why accumulators are so popular – because your four bets at evens actually offer a return of 15/1, meaning you can potentially win money from a relatively low stake as long as no team lets you down. Increasing the odds just a little can lead to even bigger returns because of the way these bets multiply, and in the example above if the four sides had been priced at 5/4 (2.25 in decimal odds) the end return would be a whopping £256! 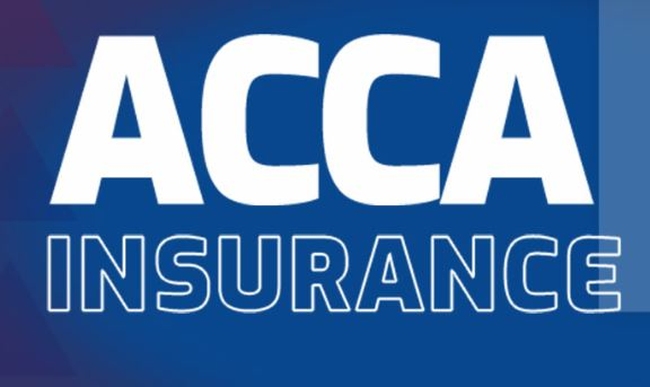 With any form of accumulator there are various options when it comes to covering the different bets. At the very simplest level (a double) as well as covering the double itself you could also cover the singles that make it up, so you would be placing 3 bets: 2 x singles and 1 x double. This wouldn’t normally be classed as a multiples bet although technically it is, as you would still get paid out from the singles bet if only one of your selections won. 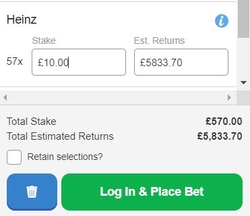 Heinz: Same picks as above

A more frequently placed multiples bet is called a Trixie (also known as a full cover bet) which involves three selections and is one step up from a double. In this bet, as well as the treble – where all three selections must win – the bet also includes the three possible doubles, to make four bets in total.

One step up from a full cover bet is a full cover bet with singles and this includes all the singles as well as all the accas. So in the case of a three-selection Trixie there would be a total of seven bets; the four mentioned above plus three singles. This bet is called a Patent, and so the idea goes on. Of course, the stakes get higher and higher the further up this ladder you climb, so you need to watch that total at the bottom of your betslip.

Below we have some examples of other well known multiples bets, although there are many more covering a huge range of bets that can be made on football and other sports.

Can I Include any Bets in an Acca or Multiples?

You can combine anything in an accumulator as long as the bets are not related, or what the bookies call “related contingencies”. A controversy not so long ago involved a punter who placed a bet on it snowing in various places around the UK on Christmas Day. He thought he was in for a £7m payday after betting on what he thought was a huge accumulator. His bet included a White Christmas in Leeds and Wakefield, both at odds of 5/2, as well as in several other places, but clearly if there is snow in Leeds the odds of snow in nearby Wakefield are not 5/2 but much lower – it’s only 12 miles away.

A good football example involves a side to win 1-0 and their top striker to score first. This is not an accumulator where the odds for the correct score and first goalscorer are effectively multiplied because if the star forward scores first their odds of winning 1-0 are automatically much lower. Instead, this as calculated as a single bet – a scorecast. In the same way, backing Team A to win and both teams to score is a single bet, rather than a double involving those two selections.