Until Unibet purchased the company for almost £20m back in 2015, Stan James were one of the UK’s most recognised gambling operators. Although never the biggest bookie on the high street, in their prime Stan James were a very popular choice among punters, with a respectable 112 shops dotted all over Britain.

Over the years, Stan James were involved in a number of partnerships and sponsorship deals. The company had a big footprint in UK horse racing, as well as sponsoring World Matchplay darts from 2000 to 2010. They also had several successful marketing campaigns, the ‘Who are you with?’ adverts from 2012 probably being the most memorable.

In their 40+ years of operation, Stan James offered high street, online, mobile and telephone sports betting services, as well as Casino, Games and Poker. Despite no longer being with us, Stan James will always have a place in the hearts of the die hard bettors of Britain. 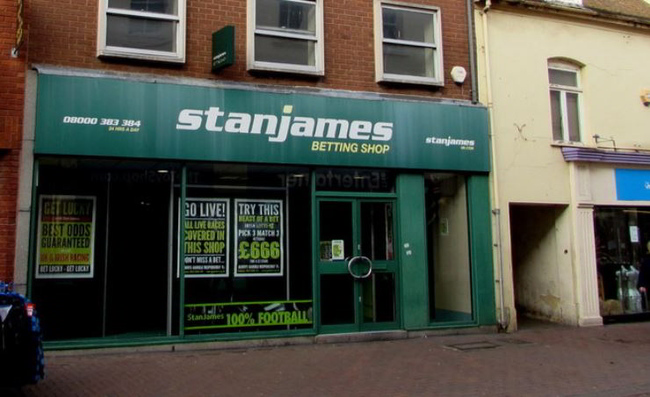 The Stan James brand started back in 1973 when Steve Fisher and James Holder opened a betting shop in Compton, Berkshire, an area in which many racing trainers were based. The company got their name by combining Steve and his wife Anne’s name to make Stan, with the James part obviously coming from Holder.

In those early days, Stan James set themselves apart by becoming one of the first betting companies to offer a dedicated telephone staking service, which was cutting edge in the 70s, believe it or not. At that time, most bookmakers were only taking bets over the counter, so it put Stan James on the map. The majority of their business was done closer to home, so opening up the telephone service was a breakthrough idea that made their service available countrywide.

The idea really took off, with many other bookies following suit. However, this eventually meant much more competition for telephone bets, and so, with only a few physical shops mostly around Berkshire and Oxfordshire in their portfolio, Stan James decided they needed to expand their high street offering in order to keep up. This led to a healthy period of growth and expansion.

Although things were going very well for Stan James with their business slowly growing, they had a huge breakthrough in 1990 when Sky Sports was born. Sky Sports quickly grew into one of the biggest live broadcast sports services in Britain, and Stan James benefited immensely from it.

Where previously betting on televised events mainly involved horses and football (the big two still to this day), those at the top of the company spotted the opportunity to offer customers the chance to enhance their viewing pleasure by betting on several other events that were now being transmitted live by Sky.

As Sky Sports evolved, so did the range of sports on offer at Stan James. As live TV was introduced into betting shops Stan James made sure to move with the times, offering more markets on more televised sports than ever before and winning themselves plenty of new customers in the process. 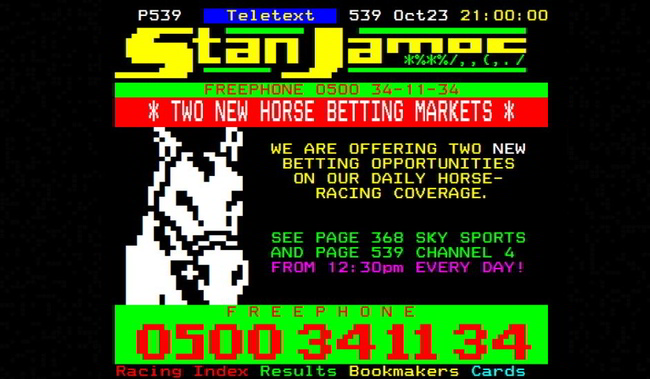 Teletext is now a thing of the past, but before the internet Teletext was an excellent way of giving people up-to-date information en masse. Stan James began to advertise their Teletext pages in popular betting papers like Sporting Life and the Racing Post. This got the word out that if bettors loaded up a certain page on the Teletext screen from the comfort of their own homes, they would be able to view live odds on the horses and other events.

With the steady growth in the number of high street shops, the popular telephone betting service, and their excellent use of Teletext, Stan James were gaining a reputation as a unique and forward-thinking company. Most people were unfamiliar with the internet at the time, so it could be argues that Stan James revolutionised betting in the 1990s.

The late 1990s and early 2000s saw the internet becoming a feature in more and more people’s homes. The public were going from getting their daily news from the newspapers or the television, to logging in online and checking live information as and when they pleased. For the betting industry, the birth of the internet was about as big a game-changer as could be.

It took a few years for betting companies to really tap into the potential of online gambling, but Stan James were pretty quick out of the blocks. By 1997, much earlier than most of their rivals, the company had their own betting website and started to attract a lot of new customers. Their outstanding telephone service certainly helped them when it came to the internet business as they not only understood how a customer-focused approach would increase satisfaction and hence business, but they also had a customer base used to betting remotely.

The late 1990s represented a time of huge expansion and growth for Stan James. The top brass worked hard to secure mergers and partnerships, while the betting side of things continued to flourish. In the following years, the company would flex its muscles and look for sponsorship opportunities. 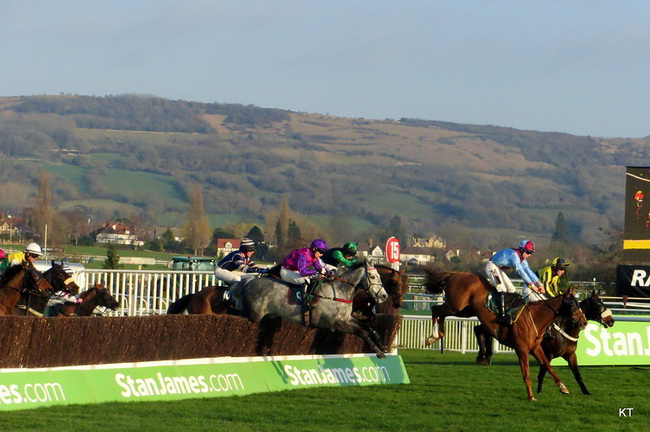 As the new millennium began Stan James were involved in a number of sports sponsorship deals. The company had a very successful partnership with World Matchplay (darts), with both parties helping promote the other. From Stan James’s takeover as the main sponsor in 2000, the event grew significantly in size and popularity, becoming regarded as the second most significant darts event behind the PDC World Championship. This partnership eventually came to an end in 2010.

From 2005 to 2008, Stan James were the sponsors of the King George VI Chase, another high profile deal. The King George is one of the most popular annual races in Britain, run at Kempton Park each year on Boxing Day, and during their sponsorship tenure the imperious Kauto Star was a winner on three occasions, garnering much press attention.

In 2006, the company also began to sponsor the Guineas Festival. The two day festival at Newmarket features the first two Classics of the flat racing season, the 2,000 Guineas and the 1,000 Guineas, and the Stan James brand name was on the boards until 2010.

It was in 2010 that Stan James dipped their toe in the biggest racing festival of them all: the Cheltenham Festival. The Champion Hurdle, which is the most prestigious hurdle race there is, was Stan James’ target, and they sponsored this opening day race until Unibet took over in 2018.

In 2007, exactly 10 years after first going online, Stan James bought the Betdirect bookmaking company which was considered a real coup at the time. Stan James paid 32Red £5.75m for the betting company which had been established in 1998, and although it took a while it was successfully merged with Stan James in February 2009.

Around the same time, Stan James decided to purchase the online only betting company betterbet.com. They were part of the London-based bookie called Better, and the deal went through in 2008.

It wasn’t just acquisitions they were interested in though. In 2009, Stan James started a co-operation with BETKICK Sportwettenservice GmbH, an Austrian company, to found SJBET and SJBET24.com. This brand was specifically aimed at the European market, though the UK remained their priority overall. They also entered partnerships in Spain, the US, and Ireland, as they attempted to spread their wings.

Not forgetting their roots on the high street, Stan James pounced quickly to buy 27 high street shops when a company called Pagebet went bankrupt in 2010, further expanding their property portfolio.

Just two years later one of their most comprehensive marketing campaigns ever got underway, the memorable “Who are you with?” campaign. It revolved around two characters called Stan (played by TV presenter Anthony Richardson) and James (played by comedian Kevin Dewsbury) who were loosely based on the founders of the company; one bet with his gut, the other with his head. Customers were supposed to choose who they would side with. It was mainly a marketing campaign to direct more people to their website, but there were a series of funny Youtube videos that are still available now.

As Stan James started to acquire smaller business and become stronger, they themselves became a good prospect for even bigger fish. In 2015, Unibet made a move to purchase Stan James for £19m, taking their full rights and assets in the process. The price was considered very low at the time, even though the deal only included the company’s online operations.

This was the beginning of the end for Stan James, but the shops remained open under the Stan James name initially. Unibet’s plan was to grow Stan James’s online market even further, while also giving Unibet more authenticity to UK customers.

As Unibet took over Stan James’s online business, the company persisted with growing their high street presence. In 2016, Stan James decided bought 37 betting shops from Ladbrokes and Coral who were merging and needed to offload due to competition law.

However, as part of the deal with Unibet, Stan James were only allowed to continue using the brand name for a transitional period, so Steve Fisher needed a new name before being forced to change it. The rebranding to Megabet cost the company around £1m, and due to government’s increase on tax due on Fixed Odds Betting Machines, roughly a quarter of their shops had to close. 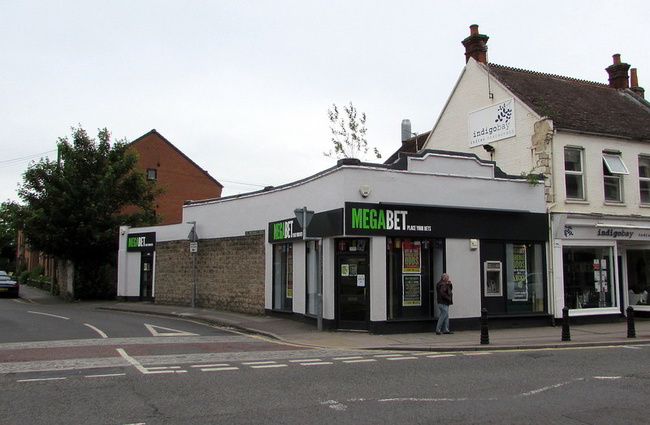 Stan James was eventually swallowed up into Unibet, before the Kindred Group became the parent company for Unibet and all of their other brands, and Stan James was no more. But they had left a lasting legacy.

In their prime, Stan James were one of the UK’s hottest betting companies. They may have come to somewhat of an anticlimactic end, but their impact certainly shaped the gambling industry for a time, and the brand lives on in a way, through the high street stores now known as Megabet.