William Hill has been one of the leading bookmakers in the United Kingdom for many years now. The company was founded in way back in 1934 and became a mainstay of many a high street before diversifying into online gaming with the dawn of the internet. William Hill has a long and fascinating history, and though they have changed hands many times throughout the years, the brand consistency has been maintained.

William Hill is the number one choice for many people in the UK when it comes to their betting needs, whether that’s on the high street or online. The company’s revenue is generated through three main types of business: online, retail, and William Hill US. ‘The Home of Betting’ is William Hill’s slogan, and they are certainly one of the most trusted brands in the betting industry in the eyes of UK punters.

With a betting heritage of 85 years and counting, starting as a postal and telephone betting service in the 1930s, the company now attracts millions of customers from all around the world and in numerous areas of the industry. It is an instantly recognisable brand built from rather humble beginnings.

In 1934, Mr William Hill founded his business at a time when gambling was illegal in Britain. Hill himself was born in Birmingham in 1903, leaving school at the age of 12 to work on his uncle’s farm. He moved to London in 1929 where he started taking bets on greyhounds, before opening a gambling den in Jermyn Street (near Piccadilly Circus) in 1934. This slightly shady beginning was the seed of the business that remains to this day.

But William Hill was no crook. He exploited a loophole in the system which allowed credit or postal betting but not cash wagers, which were illegal at the time. He was a shrewd business man with an eye for opportunity.

As business picked up William Hill became more financially buoyant, and he was able to reinvest some of that money in various assets including what he knew best – greyhounds. In 1938, Hill was the joint owner of a greyhound called Lone Keel who went on to win the 1938 English Greyhound Derby, earning prize money of £1,250 (which was a decent amount back in those days).

Further proving his entrepreneurial spirit, William Hill produced the first fixed-odds football coupon in 1944, decades before modern day punters would have a weekly flutter in the betting shop prior to watching the football scores come in at their local. 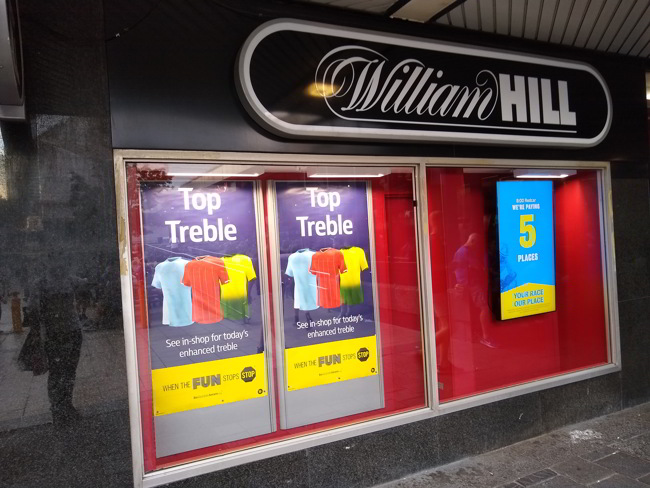 In 1961, the government gave the go-ahead for high street betting shops to open for business, following the introduction of the new Betting and Gambling Act. Six months after the new law was introduced, 10,000 shops were already set up and some companies began to be very successful.

William Hill, however, was initially against this, calling legal betting offices “a cancer on society”, and it took him 5 years to change his mind. After giving his competitors a good head start, the first William Hill betting shop was opened in 1966.

This was a significant year for Hill and for the gambling industry in general, as World Cup fever hit and the public took to betting like never before. The fact that the competition was held (and won) on home ground had a lot to do with it. This was also the year that the company began making acquisitions, ensuring expansion and growth in the years to come.

Unfortunately, after retiring in 1970, Mr Hill passed away the following year while visiting Newmarket. He suffered a heart attack while in his hotel, on October 16th 1971. He left behind a huge legacy, which has grown stronger and stronger as the years have gone by, so although it was the end for the man himself, it was nowhere near the end for his company.

After his death, the company was acquired by Sears Holdings, and by 1973 the number of betting shops in the UK peaked, many of them run by William Hill. An astonishing 14,750 shops were open at that time, and several new companies began to spring up all over the country as gambling became something of a national pastime.

In 1988 William Hill was acquired by Grand Metropolitan, the owners of Mecca Bookmakers. This was the first of many changes of hands the company would go through over the next decade. The two companies merged, with William Hill retaining their name since it was so well known. Just a year after that, Brent Walker purchased William Hill, and by that time the company had 1,800 betting shops and was the largest credit betting operation in the world.

1989 was a big year for the company. Not only did William Hill become the largest betting operation in the world, they were also appointed the official bookmaker of the European PGA Tour. It was the 18th official season of the European Tour, also marking the tour’s first visit to Asia. Over the course of the year, 36 tournaments were held, with competitions in Spain, France, UAE, UK, and the US.

In the mid-90s there was good and bad news for the company. Football pools coupons became legal in betting shops – and the football accumulator has been hugely popular with customers ever since – but same year, the National Lottery began and represented a real threat to William Hill’s financial success.

In 1997, Nomura (through Grand Bookmaking Company Limited) purchased William Hill from Brent Walker for a staggering fee of £700m. A year earlier, Brent Walker had recouped £117m of the £685m it had paid for the company when Grand Metropolitan were found to have exaggerated the company’s numbers at the time of the sale.

Japanese Investment Bank Nomura took over as Brent Walker collapsed with debts exceeding £1.3bn. Nomura’s introduction paved the way for even more success for William Hill in the upcoming years.

1998 was another big year for William Hill. The internet was relatively new to most households at the time, but the bookmaker launched their online betting service, Sportsbook, nevertheless. This opened up a whole new world of betting opportunities and a chance for William Hill to capitalise.

A year after the internet breakthrough, William Hill were on the move once again. The company was sold to Cinven and CVC Partners for a whopping £825m, putting a halt to plans for stock market flotation, and the start of the 21st century brought yet more expansion. Hills launched an off-shore telephone betting service, were the first major bookmaker to offer a deduction-free betting service to UK-based clients via the internet, and they also launched their online casino in the same year.

In 2002, things were going so well that William Hill floated on the London Stock Exchange. The offer price was 225 pence per ordinary share. A year after that, the company purchased the Brough Park Greyhound Stadium to broaden their horizons even further, and gave a gentle nod to their origins at the same time.

The 2000s were a great decade for William Hill in general, and there was a lot of change both in terms of customer facing aspects and what was going on behind the scenes:

Business was great at home, but the company was about to make a huge breakthrough in the United States of America in 2012. William Hill became the first European gaming operator to be awarded a full gaming license in Nevada, and William Hill US was born.

William Hill US was created by merging three small sportsbook operators under the William Hill brand. Following the May 2018 ruling of the US declaring the Professional and Amateur Sports Protection Act (PASPA), many other states in America have begun to legalise and regulate sports betting. At the time of writing, William Hill have secured access in 24 states.

Two years later they also hit a mobile milestone when their sports book app hit 2 million downloads in 2014, and that number will have grown significantly since then. 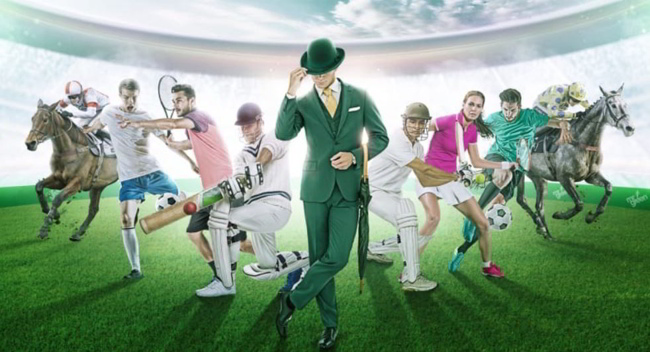 After some internal reshuffling and regulatory approvals, the company completed the disposal of its Australian business to CrownBet Holdings PTY Limited for an enterprise value of A$300M. Then, in January 2019 the Group completed the acquisition of Mr Green & Co AB, which is a growing European online gaming company. The £242m deal enhanced the company’s European footprint, further increasing their international and digital revenues.

This has helped William Hill to become one of the leading online betting and gaming providers in the world, and exactly 20 years after first going online, 39% of the Group’s net revenue was generated from online betting.

Since the acquisition of Mr Green, 2019 saw more than three million customers gamble online with Hills, with customers having access to over a million betting opportunities every single day. From live sport to online casino gaming, William Hill, the company that was initially a little late to the party, now has it all.